So… As you can guess this week was jury week for department of architecture students. And this juries are open for everyone. I like attending other studios’ juries. It made me feel like I am not alone, and I can get inspiration from them. This year I got a chance to attend first year and fourth year studios final jury. You can guess there is a lot of difference between those studios. I mean while one is more abstract, the other has more realistic idea and so on. I want to start with first year studio.

The name of the project in Arch101 was S, M, L, Volume. Their aim was to create intersecting volumes according to two themes. They had some operations like scale, rotate etc. I only had a chance to listen one person because I had a project to work on at the same time. The problem is I couldn’t remember the person that I listened 😊 I remember the project and what she did, but I forget the name. So, let me explain the project.

(A photo of first year studio)

He chose 5th part of the Dikmen valley. When he analyzed the site, he noticed that there are 3 different life style that are separated from each other. These 3 life styles are apartment, slums and residential. He tried to integrate those 3 life-style in one, so the project was like integration of cultures. He had two activity group that are regain and cultural activities. Jury questioned about the idea of climate change in the design and he said if the garbage is not used they burned them. But thanks to his design they can regain those garbage. Also, by cultural integration, he tried to break the separation of those 3 life-style and this idea liked by jury. They thought it can be helpful to transfer information easily and it make the idea of regaining or recycling shareable.

Those all I have for juries. Attending first year and last year studios’ juries was like going past and future. I saw myself I first year studio while listening freshman and it was emotional. And by listening last year I felt like one day I will be one of them and it will be my last year in department of architecture.

As TEDUArch we had a tradition about juries. Every student has a jury buddy that take notes for he/she. It was a useful idea for student because during the jury we can’t totally understand what jury members said because of the nervous environment.  Was the buddy of Şeyma Dilara Aldemir and now you are about the read her jury.

Dilara’s general idea is that gathering up the spaces around the circulation system. Every program work in itself like mini factories and this program places around the circulation system. She tried to solve volume in one another. It provides relation between the programs according to her idea. The spaces which is interlock to the vertical circulation system, forms regenerative bundles and power station which have a different activity. These activities are not isolated each other thanks to the idea of solving volume in one another.

The main critique that she took from jury was about the diagram that she has. In her diagram she had spaces that interlocked from one main system, but they couldn’t see it neither her drawings nor her model. They said there are spaces that are coming together but not in the way that the diagram shows. Other problem was location of the building on topography. Jury asked her why she locate her structure in a crosswise manner and said that there are some undefined areas in topography and she can solve it by locating the building. Jury was satisfied with the drawings but there were some problems about where that section was passing through plans and the name of the plans. Lastly, they added some proportions and dimensions are problematic in sections. But it was because they couldn’t see where those sections passing because after she shows those spaces in her model they said okay.

You can see her process in her blog by clicking here. 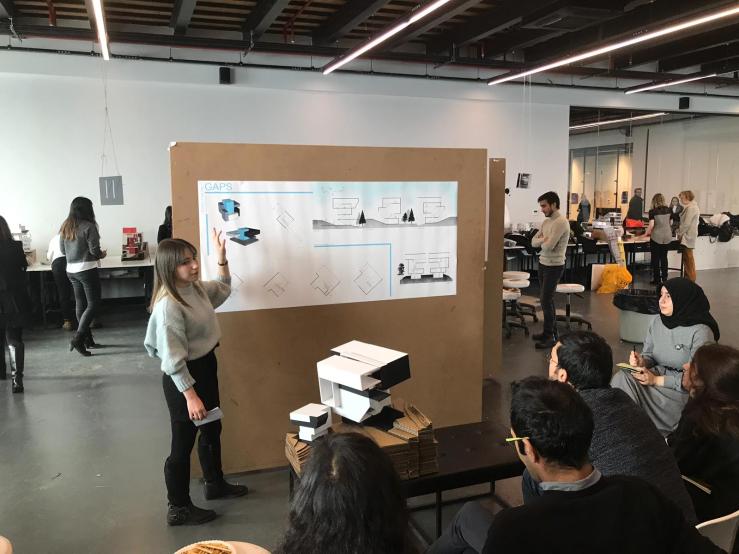 Hi, final juries are finally over, and I would like to talk a little about my jury experience and how was my jury.

First, after the second pre-jury I tried to improve my design. As a strategy I have still two units that are productive and housing units. That two units are separated from each other by a wall and that wall is the main element of the design. I tried to make that wall more obvious. That’s why I changed the thickness of the wall. And the wall extend itself through surrounding of the structure. Also, by shifting the wall through the other unit I designed service kit, so I have an axial way for the service kits and around the wall there is horizontal circulation, too. That was the general idea of my proposal.

Now let’s move on the jury. After I finished the explanation of the strategy, silence covered the hall area. No one was talking, and no one made any comment about my proposal. That time was the most nervous part of my jury experience. I was waiting for the comment and time was passing and I started to feel nervous. Anyway. After those horrible moments I took some suggestions. The first one was about the obviosity of the wall. Even though I try to make it obvious, jury members said that it was not enough. It may be long and more obvious. Second suggestion was about the location of vertical circulation, stairs. The wall can hold the stairs as well, like it holds the service kits. But the problem about that suggestion is I have an idea about ‘+’ shape with vertical and horizontal circulation. I explained it of course and it was somehow okay.

The biggest problem was about my model. I was okay with my drawings, my diagrams and my mass model but the section models… I don’t know why but it became a nightmare for me and it has a lot of problems and not expressive enough. Jury said that, too. So, I can say that, I must work on modelling next time. 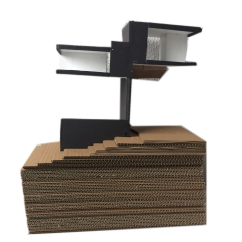 I guess it’s all about my jury. I know I have a lot of to work and I am not sure, but I can work on to improve my design for m portfolio. (Let’s hope like that)

As an architecture student, presentation is very important for us. While presenting our ideas to other people whether they are architect or other people we should be very impressive and clear. So, in order to do this, we are making posters or we are using other things beside our constructs for our presentation. We are doing this because sometimes these posters or other visual things can help us to explain our ideas more.

In our Arch111 course we are assigned to make a poster for our construct. It was our final assignment. For poster, we drew orthographic sets , a section and an axonometric drawing of our construct. We arranged them what we want.

While making my poster, I tried to keep it simple. There is one reason for this aim which is I don’t want to lose my control on the poster. If I used more colors or such things, I thought I would lose the ability to control it. And also I only use my construct photos colorful so that they can attract people. Also, I don’t want to make poster as a combination of drawings (because we have lots of drawings) I preferred to divided my poster pieces and arrange them in an aim which is about presentation. I thought, how would I present my construct without seeing it as a 3D. That’s why I designed my poster in this way.

I have couple of mistakes that I notice after the submission. One of them is the spelling of ‘orthographic.’ and the other one is the place of the ‘dense and sparse units’ writing. I think I missed that part while designing the poster because I was mostly thinking about the position of the photos and drawings.

Anyway, it was the first poster for something that we should present so, I will be more careful for next ones.

Okay… To be honest, it was the final assignment of Arch121 course we were assigned to listen at least 2 project from at least two juries. But I listened more than 2 because it was a new thing for me. In previous year, I mean at the ELS, I always planned to go juries but I couldn’t so it was the first time I went to a jury which is not mine. I understood most of the part of the juries especially second years students juries because it was not far away from what we did for this semester but when we came to third and fourth years juries it became hard to understand. I was still able to understand some part of the juries but as I said it became harder when the studios getting bigger. In the second years juries, they were more focusing on the relations which we are already aware of it, third years and fourth students was becoming more realistic than we did.

When this assignment was given the us, I planned to read books instead of going to juries but now I really appreciate to go them. I want  to give an advice to read this blog: you should go to the juries and observe them as much as you can. It will help you to understand the juries more. I would like to write my report here, too but it was our assignment so most probably I shouldn’t.  But you can see process from their blogges.